Our perspective on education and employment opportunities for refugees

By Israr Ullah and Abdul Musawer 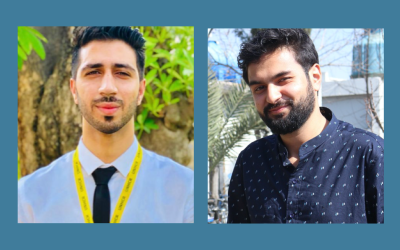 Life can be hard for many people but is often even harder when you a refugee. To be able to build a better future it is necessary to have skills, which can be achieved by acquiring education either through formal schooling or technical education. However, it is not always easy to get a stable education, especially when you have migrated from your home country. In this blog, we will share our perspectives of the key issues faced by Afghan refugees who want to access education and employment, as well as a story of a young Afghan refugee participant from the Voices of Refugee Youth research study.

The main issues faced by Afghan refugees who want to be educated and employed in Pakistan are the barriers to accessing the country’s education system (including university) and access to employment after graduation. One must navigate the complex landscape of the labour market when trying to get a stable job due to labour laws and restrictions placed on companies within the host country.

In addition, there is always the mountainous barrier of economic issues: for example, refugees might struggle to secure source of income due to inflation in the host country. Pakistan itself is going through a hard phase due economic instability, which causes lack of job opportunities for her own citizens that exerts additional pressure on refugees seeking jobs.

Afghan refugees have also never been in a comfortable position either at schools or workplaces. After they graduate from secondary school, they will have to support their families and pay their university tuition fees, no matter what they are studying. The Higher Education Commission (HEC) of Pakistan have reserved only a single quota seat for Afghan refugees in public universities; if they fail to secure the only seat, they will have to get admission as an international which is very costly. Private universities require a tough admission process and they are also costly. Even for refugees who have managed to graduate from university, the lack of job opportunities remains an important issue which needs to be resolved. As a result, most of the graduated refugees must work as a labourer to support their family members.

During our data collection for Voices of Refugee Youth, we have interviewed many young Afghan refugees who shared their life stories – many of these are related to the obstacles refugees have faced and continue facing while seeking a job. It is always a pleasure to hear from refugees because we share their griefs. Here is a story of one refugee’s search for employment, after sixteen years of education.

The story starts with us travelling to conduct data collection with young Afghan refugees in Pakistan. We started to look for a school in a refugee camp: then, travelling out of the camp for half an hour in a car where there was no one to be seen, we approached the school and found a huge number of students studying in their classes. The scenario was quite strange for us youth researchers – its sight was familiar of what we have been through.

During our period of data collection at this school, we interviewed a young refugee. He told us about the dreams he had for his country and his family. We asked him about whether he thinks these dreams or goals are achievable? His eyes became moist and held his tears back, which were readable; we understood him. As a refugee, it feels as though no one really cares if he is literate or illiterate as it makes little difference to his future opportunities. He described his efforts to obtain education. He would walk in the early morning for an hour in both the hot Pakistani summer and the rainy winter days to be able to learn for the future. The future which he is unsure about, but he can only hope and knows that his chances will be few.

He then went on telling us about his daily routine. After returning from school, he would eat at home and then leave for his job, collecting garbage (mainly dry bread) and then selling it to the people who need to feed their animals. If he is able to earn money that day, the family would be able to eat, else they would have to sleep hungry. Making ends meet is always hard for those refugees who live in a rural area.

While we have always heard that education is key to success, the story of this young refugee makes us question about what kind of education is needed? He tried very hard to attend school for sixteen years while also working to earn money for his family, but he still has little hope for the future. What more can hardworking refugees do when we complete secondary education but are unable to access opportunities?

Afghan refugees rarely have any opportunities to pursue education and employment goals within the society, and instead often need to be a labourer or a daily-wage earner to feed his or her loved ones. Refugees not only lack attention from policy-makers in host countries, but even alternative education (like, the vocational training provided by UNHCR) often results in the same end product. More work is needed to ensure that refugees can use their education and achieve their goals. Thus, collective efforts are required from the local and international bodies including the countries around the world: the aim is to save the generations who dream for a prosper future and yet have dreams shattered because of their refugee status.

In the words of British Somali poet, Warsan Shire: