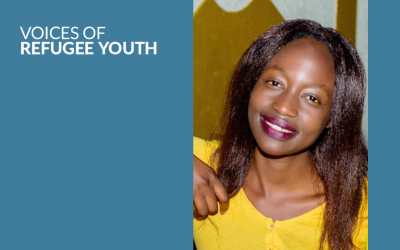 Worldwide, the number of refugees has been increasing due to new crises and the lasting impact of old ones.(1) One crucial way to support refugees to achieve self-reliance and tackle the challenges they face in host countries is through the provision of quality education. The Voices of Refugees Youth study aims to research refugee education in order to generate evidence for informed decision making. In the following paragraphs, I narrate my experience as a youth researcher during the second phase of data collection for the Voices of Refugee Youth study, including the challenges met and my approaches to mitigate them.

Data Point 2 was the second round of data collection for the Voices of Refugee Youth study. It was conducted primarily in Mahama and Gihembe Refugee camps in October, 2021. It involved a survey with several hundred young refugees, evaluating the impact of post-primary education in emergencies. This data point also explored the effect of Covid-19 on these young refugees, in addition to their experience of education.

The first challenge I met while collecting data was the fact that refugees were moving from one camp to another. This happened because their former camp was in a zone prone to natural disasters and was overcrowded, while there was another less populated camp. Due to this situation it was not easy to find certain participants because the easiest identifier in a refugee camp is a home address. The home address became even more important as, after graduating from secondary school, many participants had changed their phone numbers. To mitigate this obstacle, I contacted the UNHCR staff member who was in charge of the relocation process to know which people were due to move last. I therefore started by surveying the latter participants and, when all were moved to the new location, I went there to complete the exercise with the remaining participants.

Secondly, Data Point 2 was made difficult by the fact that our participants who were first contacted in their final year of high school had moved out of the camp to seek jobs. This, compounded with other factors, made it difficult to reach out to some participants. Often, in order to get in touch with them, their schoolmates were contacted; sometimes this would not help and alternatively their parents had to be sought for and asked for the phone numbers of their children.

The last challenge worth mentioning is the impact of some of the students having to change schools. Mostly, this was for reasons that were far beyond the students’ level of education attainment. This is best exemplified by the story of Keza.

Keza is a 20 year old refugee who moved from her camp and came to a school close to Gihembe. When we were interviewing refugee students from Gihembe, we included Keza because she was also a refugee, although from a different camp. Her school expenses had previously been paid by one of her relatives who passed away near the beginning of her last year of high school. She could not afford the private school any more. She was then obliged to move to a public school where there was not the same course which she was taking at her former school. She therefore had to change her major in the final year. Before the year got in the half, her former classmates learnt about her situation and put together their allowances to pay her school fees. This ended up bringing her back to her old school and resuming her course of choice.

Like Keza, there were other participants who had moved between schools and therefore it took me time to get in contact with them. It was, however, worth the effort because these students often were the ones with particularly interesting stories.

To sum up, the second phase of data collection for the Voices of Refugee Youth study was an exciting experience. It had unexpected challenges and responding to them added value and content to the study.